A huge thank you to the Falkland Islands Government for partnering with us on a two-part outdoor photography exhibition which was seen by hundreds of thousands of people on Brunel Square throughout 2020.

This second part of the exhibition showcases new photography depicting life in the Falkland Islands today – – the community that sheltered the ship for 84 years. The SS Great Britain docked in Stanley for repairs in 1886, during a disastrous voyage towards Cape Horn and served as a floating cargo store before being scuttled in Sparrow Cove. In fact, she spent longer in the Falkland Islands than anywhere of the other places she has been during her eventful life. 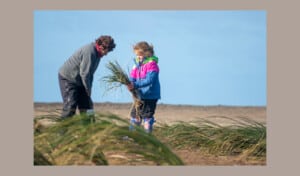 Tussac
A Falklands Conservation volunteer plants tussac in the Falkland Islands. Small tussac tillers grow into ‘tussac bogs’, restoring eroded land, and creating a home for wildlife including penguins, seals, small birds, and invertebrates. Tussac also lays down carbon when it forms tussac-peat, so these volunteers are helping in the global action against climate change. Falklands Conservation works with the local and international community to conserve the natural environment of the Falkland Islands. www.falklandsconservation.com 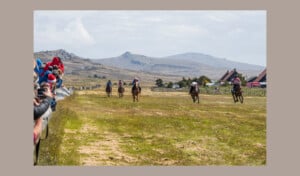 Boxing Day races, 2015
Jockeys from the Falkland Islands community compete in the ‘Governor’s Cup’, a race which takes place annually on Boxing Day. The races are an important community tradition, which has continued for more than a century. The Falkland Islands are in the southern hemisphere, so December is in the middle of summer. In January 1957 HRH the Duke of Edinburgh visited Stanley and took part in the ‘Sailor’s Cup’ race, which he won. He also piloted a seaplane to view the SS Great Britain in Sparrow Cove. 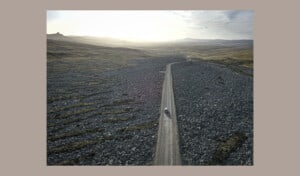 The Stanley Road
The main road from Stanley (capital of the Falkland Islands) runs across the island of East Falkland to other settlements around the coast. Falkland Islanders’ name for the interior is ‘Camp’. Here the road crosses a stone run, where freezing and thawing during the last ice Age fragmented and scattered rock to create a landscape of boulders. Charles Darwin wrote about these ‘streams of stone’ when he visited the Islands in 1833 and 1834. The area of the Falkland Islands is more than half that of Wales, but the surfaced road covers around 620 miles.

Sunrise at the Liberation Monument
The 1982 Liberation Monument in Stanley commemorates the British Forces and supporting units that served in the 1982 Conflict. On 2nd April 1982 Argentinian forces occupied the Islands. The occupation lasted 74 days until 14th June.

255 British military personnel died in the conflict, and the monument records their names. The names of the 649 Argentines who died are recorded at the Argentinian cemetery near Darwin. 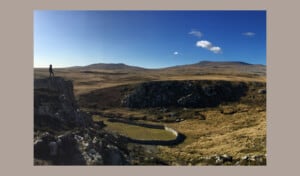 Cerittos Corral
Cerittos Corral sits at the base of Mt Usborne, the highest mountain in the Falkland Islands. A network of walking trails has recently opened the remote landscape to visitors.

Sheep farmers built this old stone corral to gather flocks. There are 84 farms and approximately 500,000 sheep on the Islands, and wool production remains important to the Islands’ economy. 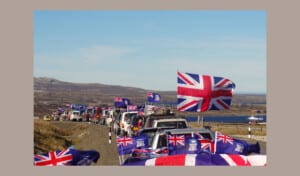 2013 referendum
In 2013 a referendum asked Falkland Islanders to vote on whether they wanted the Islands to remain an Overseas Territory of the United Kingdom. 1,672 residents were eligible to vote, and a clear majority voted to keep this status.

The Islands are self-governing, with an elected Legislative Assembly. The community supports itself economically, and relies on the UK only for defence and to maintain international relations. 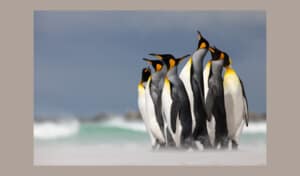 King penguins
King Penguins are the largest of the five penguin species that live in the Falkland Islands. There are 1,500 breeding pairs on Volunteer Beach, where these birds were photographed. Other species include the Gentoo, Macaroni, Magellanic and Rockhopper penguins – a total of around 1 million breeding birds across the Islands. 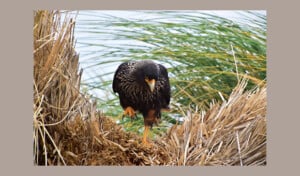 Johnny Rook
Johnny Rook is the Falkland Islanders’ name for the Striated Caracara, a bold scavenger which steals seabird chicks and carrion.

This bird was photographed on Sea Lion Island, a nature reserve to the south-east of the archipelago. Here, during the spring and summer, Sea Lions and Elephant Seals pup on the beaches. Killer Whales patrol the sea around the island, waiting to prey on these colonies. 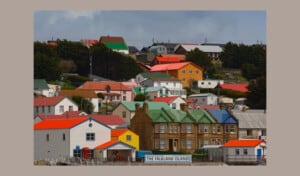 Stanley rooftops
Colourful tin roofs brighten the houses of Stanley, capital of the Falklands and the only town on the Islands. Stanley is home to more than 2,500 people, and contains all of the essential services, facilities and infrastructure for the Islands’ community. The town is also a regular stop for cruise ships touring the South Atlantic: around 65,000 tourists visit the Islands each year. The SS Great Britain was moored in the harbour at Stanley for 41 years between 1886 and 1937. 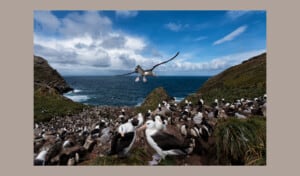 Albatross colony
The Black-browed Albatross are known locally as ‘Mollymawks’. The Falkland Islands are the most important site globally for this beautiful seabird, holding 70% (500,000 pairs) of the world population. Their name comes from the distinctive black line over and through the eye, which shows up strongly against the pure white plumage of their heads. These albatross have a huge wingspan of 210-250cm (7-8ft).

Trawler
The fishing industry is very important to the Falkland Islands economy, contributing around 40% of the annual income. Squid is a big part of the catch: most of this is shipped to Spain. Since the introduction of the Fisheries Conservation Zone in 1986, the fishery has been managed to ensure it remains sustainable and protected. 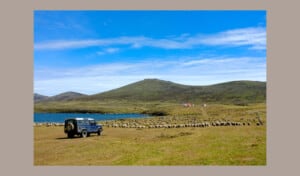 Sheep farming
Historically and culturally sheep farming is the most important industry in the Falklands. The Islands’ coat of arms shows a ram with a thick white fleece.

Between 1886 and 1933 the SS Great Britain served as a floating warehouse for fleeces awaiting export from Stanley. Today the Falkland Islands also export mutton, lamb and beef to the UK and Europe. 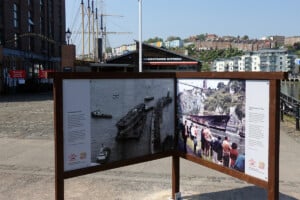 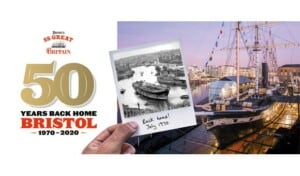 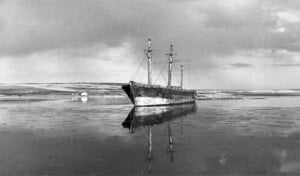 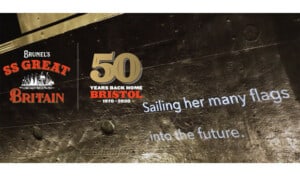 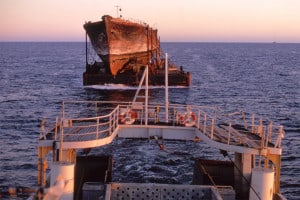