The Launch Of The Great Britain Steamship, 1843

The launch of the SS Great Britain in 1843 was dramatic. Queen Victoria’s husband, Prince Albert, had travelled on Isambard Kingdom Brunel’s Great Western Railway from London to Bristol to attend the launch. Bristolians welcomed him enthusiastically and tickets for the launch were sold with the advertisement “Prince Albert – To be seen alive!”

The SS Great Britain was ‘christened’ when a bottle of champagne was thrown and smashed on the bow (front) of the ship. There are different reports from the time about who performed this honour and what happened during the event. One version reported that Mrs Miles, the wife of a local Member of Parliament, launched the SS Great Britain. She had also launched Brunel’s previous ship the ps Great Western in 1837. Other reports claim Mrs Miles failed to hit the ship with the bottle. Prince Albert apparently then threw a champagne bottle from his table and successfully smashed it upon the ship, showering the crowd below with glass. With conflicting evidence, we cannot be certain whether it was really Prince Albert or Mrs Miles who actually launched the ship.

The construction of the SS Great Britain

The launch of the SS Great Britain caused great excitement. In 1843, the SS Great Britain was the world’s largest, longest and first iron-hulled, screw-propelled ship. Isambard Kingdom Brunel had to persuade the Directors of the Great Western Steam Ship Company to change his original design, from a ship with paddle wheels to one that used new propeller-power technology. It was this technology that was to make the SS Great Britain the forerunner of modern ships.

The SS Great Britain was built over four years by local ship builder William Patterson, in a specially built Dry Dock in Bristol’s Great Western Dockyard. Brunel was the Project Engineer and his Drawing Office can still be seen beside the ship today.

The SS Great Britain began her working life carrying passengers between Liverpool and New York City and did not return to Bristol until 1970; 127 years later. When she returned she was placed in the same Dry Dock where she was originally built, which visitors can now explore.

Joseph Walter was a professional marine painter who was born in Bristol in 1783. He lived in Portishead and, later in his life, near Bristol Cathedral. During his life, he may have travelled at sea, which might explain his great knowledge of ships. He painted many local scenes, including Bristol’s Floating Harbour and Portishead. His paintings give us an idea of what these places looked like in the 19th Century.

His ‘Launch of the Great Britain Steamship’ picture shows Bristol Harbour filled with cheering crowds of people, with the city and Brandon Hill in the distance. Joseph Walter also painted several other pictures of the SS Great Britain and Brunel’s earlier ship, the ps Great Western. These were some of his most popular pictures. This picture is a lithograph print, a printing technique that meant that many copies of Walter’s popular pictures could be produced and sold.

Watch this short film to find out more about the building, design and technology of the SS Great Britain 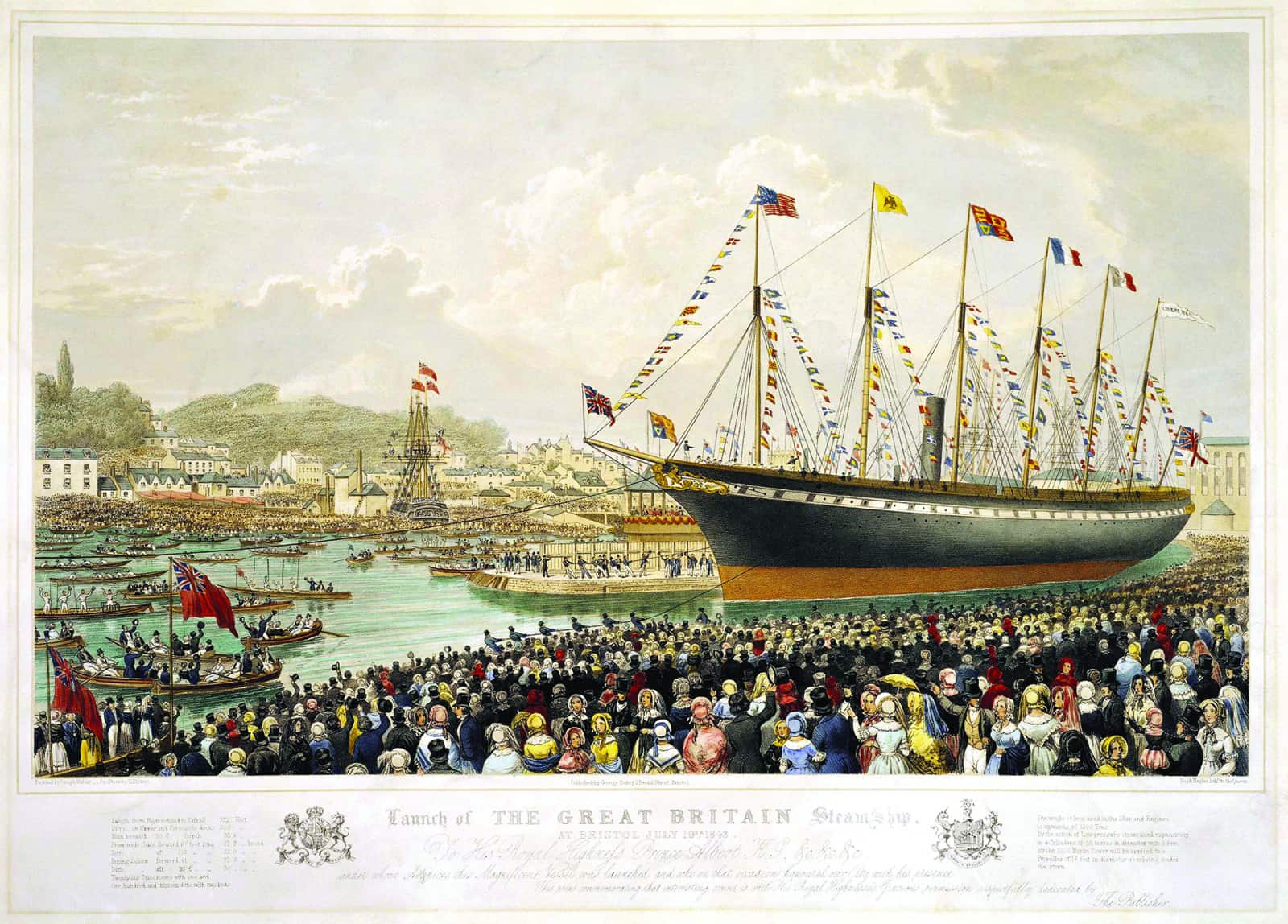 Lithograph print of a painting by Joseph Walter c. 1843 held at the ss Great Britain Trust.