Following the success of his first ship, the SS Great Western, Brunel set about designing a second ship. The SS Great Britain was originally designed to be a wooden paddle steamer, like the Great Western but larger in size.

However, in 1838 the iron hulled ship Rainbow visited Bristol harbour. Interested in finding out more about the ship’s design, Brunel sent his colleagues, Captain Christopher Claxton and William Patterson, on board for a voyage. He was then able to use their findings from the trip to support his idea to use iron rather than wood.

Using iron to make a ship’s hull allows it to be stronger, bigger and longer lasting than a wooden hull ship; the pieces of iron needed to make the hull are thinner than the pieces of wood that would be needed to give the same strength. This means that the ship ends up not just lighter than a wooden one, but there is also more space inside the ship for cargo, passengers, and importantly coal for the steam engine.

By showing that iron offered greater strength and more capacity, Brunel was able to persuade the company’s board (the people who were paying for the ship) to change the Great Britain from a wooden to an iron hulled ship, despite the fact they’d already purchased a large amount of oak for the job!

The SS Great Britain was built in Bristol harbour at the Great Western Dockyard. The dockyard would have been a very noisy and dangerous place to work mainly due to the hot riveting process needed to create the ship’s iron hull.

Large pieces of iron, known as plates, were joined together using rivets. The iron used for the plates was brought on barges down the River Severn and into the harbour from Coalbrookdale in Shropshire. Each plate had holes punched around the edges ready for the rivets.

To build up the hull of the ship a plate was placed overlapping the previous one and a bolt was put in to make sure it stayed in the right place during the riveting process. Next an iron rivet would have been heated in a furnace on the dockside until it became white hot and soft before being thrown up to a riveter working on the hull. The riveter then placed the rivet through the hole in two overlapping iron plates and the ends were shaped to keep it in place. As the rivet cooled, it would start to shrink, drawing the two iron plates tightly together. Once the plates were secure, the bolt would be removed, and a rivet put into the hole. When all the rivets joining the two plates had been put in there would be no gap between the plates for the water to get through making the hull watertight.
After 4 years of hard work, roughly 1000 iron plates and well over 100,000 rivets the ship was launched into Bristol Harbour on 19 July 1843.

Find out more about the launch of the SS Great Britain.

Explore the ship’s return to Bristol in 1970.

Watch this short film to find out more about the building, design and technology of the SS Great Britain: 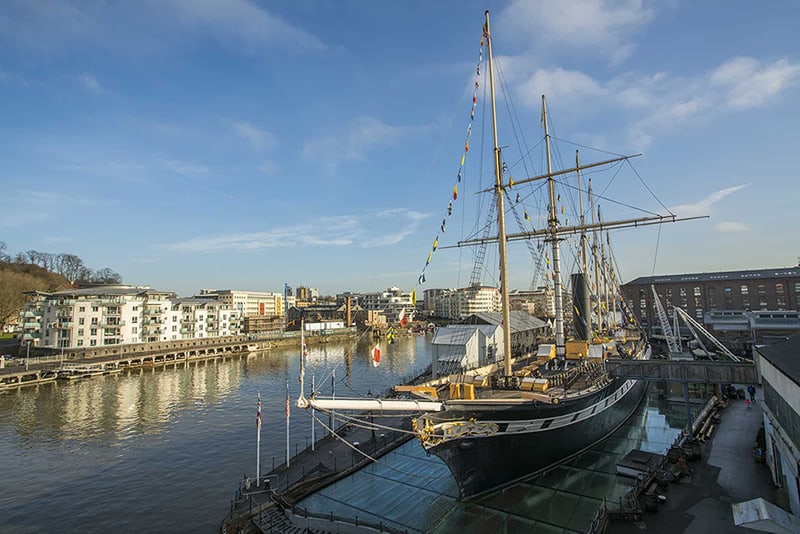