The SS Great Britain Amongst Icebergs

Through Iron Island, the SS Great Britain takes a voyage into her past. Inspired by diary entries, the words of Saili Katebe and the projection from Limbic Cinema surround the ship’s hull in her history.

Passenger diaries influenced the third act of Iron Island entitled ‘icefield’. The SS Great Britain encountered icebergs while at sea during some of her journeys. Charles Albert Chumley, aboard the Voyage 20 Return, described such icebergs ‘like a volcano of glass throwing out showers of diamonds.’ This powerful imagery has been bought to life by the immersive installation.

For about twenty years, the SS Great Britain carried thousands of people to Australia and back to the UK. From 1852 to 1875, the ship circumnavigated the globe thirty-two times. On her travels the ship encountered fair weather, terrible storms, tropical sunshine, and stunningly beautiful but terrifying icebergs.

Departing from Melbourne, the SS Great Britain headed south-east, leaving New Zealand far to the north, and sailed out into the vast expanse of the southern Pacific Ocean. She was heading towards the tip of South America, Cape Horn. Skimming the latitudes of the Southern Ocean which surrounds Antarctica, the captain hoped to catch the strong westerly winds to make a swift homeward passage. But these waters also brought with them the danger of large icebergs.

Several passengers recorded in their diaries the wonder of encountering these giants of ice on their voyage from Melbourne to Liverpool. Many described their beauty, but were glad to say that the icebergs were several miles away from the ship. Reverend Cairns who was a passenger in 1865 reported that ‘we were all at once involved in a dense fog. Along with the fog the temperature fell to a chilling coldness […] and soon huge bergs loomed as mistlike sheeted apparitions from the Antarctic’.

In 1864 a newspaper reported that the ship passed 212 icebergs in the space of just three or four days. One of the passengers, Mr. Horne, reported to the newspaper that ‘a very heavy sea was running, and the wind blew almost a gale, with snow-squalls every few minutes, and clouds as black as night.’ Captain Gray himself and three of his officers remained on watch throughout that time. Four more men were put on look-out duty to ensure the ship’s safe passage through the icefield.

When the ship was launched in 1843, she was the largest ship in the world and a technological wonder. But in the vast expanse of the Pacific and set against towering waves, storms and huge icebergs, the ship must have appeared terrifyingly small and exposed to her passengers.

Iron Island is open until the 3 October, so you can witness the SS Great Britain amongst the icebergs once more! 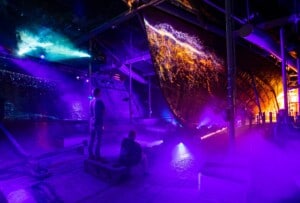 The Journey to Iron Island 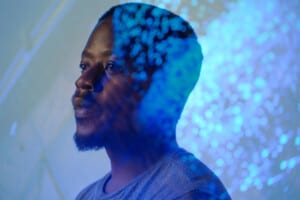 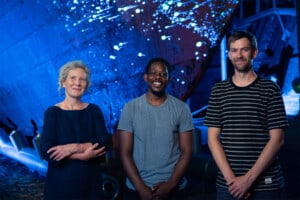