Brunel’s SS Great Britain is the top-rated visitor attraction in Bristol, known for offering a fun day out for locals and tourists alike. Visitors discover two interactive museums along with the historic dockyard before stepping aboard to explore the SS Great Britain herself – the world’s first great ocean liner.

From 23 August to 19 September, however, the dramatic dry dock will take centre-stage. The cathedral-like space is where the SS Great Britain was constructed between 1839 and 1843, now covered with a “glass sea” that helps to maintain the conservation environment that protects the fragile iron hull.

The front end of the Grade II listed dry dock will be transformed into an immersive experience by award-winning multimedia design studio Limbic Cinema. It will combine projection, lighting and surround sound to transport audiences on a journey through underwater worlds.

Much of the 1,000 square metres of laminated glass overhead will be darkened, providing a truly unique space for projection-mapped imagery to emerge on the walls and the iron hull.

Speakers set within the dry dock will resonate with music and sounds of the ocean, with an original score composed by Joe Acheson (Hidden Orchestra).

Visitors will descend under the glass sea to walk around the iron hull, becoming immersed in the multisensory storytelling as they reach the bow. Set in three acts – ‘departure’, ‘storm’ and ‘icefield’ – the audience is taken on a journey that sets off across the ocean, encountering various sea life before a storm has the ship rising and falling in the waves with thunder and lightning all around. Glowing icebergs signal a more reflective pace as the ship navigates carefully through an icefield.

Events depicted through the storytelling are developed from passenger diaries, providing a real sense of revisiting the ship’s long and dramatic history. 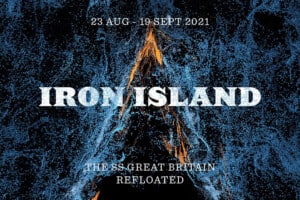 “The SS Great Britain rests today back in her original dry dock, but she was designed for a completely different environment – the world’s oceans. In fact, this astonishing ship travelled more than a million miles at sea, and she still carries traces of salt in her iron hull. Although she’ll never sail again, digital multimedia can bring the sea back to the ship and show how she performed in that element – so that audiences can see her, once again, as resilient, graceful and dynamic.”

“The combination of the iron hull, glass sea overhead and centuries-old brickwork make this a spectacular location acoustically and visually. Layer on the history and sense of bringing the sea back to the ship, and you capture a powerful sense of journey. Digital storytelling enables us to expand beyond the confines of the space. By augmenting the moving image with the ship itself we are able to create a real sense that the ship is in motion again.”

Saili Katebe, a writer and performer based in South West England said:

“The ship carried thousands of people to America and Australia – many of them leaving home forever. She still bears the cargo of their stories – so much hope, fear and ambition. I imagined the ship as an island made of iron, something which stays strong even in the upheaval of change and challenge.”

Facts about Brunel’s SS Great Britain
– Brunel’s SS Great Britain is the top-rated visitor attraction in Bristol (TripAdvisor 2021).
– The SS Great Britain now rests in the very dock where Brunel built her – the Great Western Dockyard in Bristol’s Floating Harbour.
– Known as ‘the world’s first great ocean liner’, the ship sailed around the world 32 times, travelling more than 1,000,000 miles at sea.
– Voted the second Greatest Briton of all time, (after Winston Churchill), Isambard Kingdom Brunel was one of the 19th century engineering heroes.
– At the SS Great Britain’s launch in 1843 she was by far the largest ship in the world; and the first ever to combine a metal hull and screw propulsion.

Saili Katebe is a Wiltshire based writer, workshop facilitator and performance poet. Usually writing under the pen name ‘The Blissful Nomad’ he is a keen explorer of the possibilities that language and arts have to offer. In love with rhythm and rhyme he uses the page and the stage to share his exploration of the lived experience through language and story. His previous residencies at Brunel’s SS Great Britain saw Saili write a new poem last year to mark the SS Great Britain’s 50th anniversary “back home” in Bristol: She Made it Back. Website: theblissfulnomad.com

Limbic Cinema is a Bristol-based multimedia creative studio. Their work is award-winning and internationally recognised, working with partners including Glastonbury Festival, Eden Project and Vivid Sydney in Australia. Most recently their work was featured as part of the New Frontier programme at the Sundance Film Festival in 2021. Website: limbiccinema.com