After a successful journey across the Atlantic Ocean, the SS Great Britain was taken off her pontoon, re-floated and towed up the River Avon and under the Clifton Suspension Bridge on 5 July 1970. This event drew a crowd of approximately 100,000 people, excited to see Brunel’s great ship return to Bristol.

This was the first time that Brunel’s ship had ever passed under the Clifton Suspension Bridge, also designed by Isambard Kingdom Brunel. The SS Great Britain left Bristol nearly 20 years before this iconic bridge was completed in 1864.

On 19 July 1970, the ship returned to her birthplace – the Great Western Dockyard – exactly 127 years after she was first launched from the very same spot!

Since 1970, the SS Great Britain has undergone an extensive and ongoing restoration programme, sharing her rich history, and the stories of the passengers and crew who travelled aboard her, with around 175,000 visitors every year.

Designed by Isambard Kingdom Brunel and launched in 1843, the SS Great Britain was described as “the greatest experiment since the Creation.” Brunel combined an iron hull with a steam-powered propeller to create the largest and strongest ship in the world at the time. Originally designed as a luxury transatlantic liner, she carried thousands of passengers over 30 years from Liverpool to New York City and Australia; before being converted into a sail ship to carry cargo in 1882.

In 1886, after being damaged in a storm and considered unsafe to sail, the SS Great Britain was sold and used as a floating store. By 1933, the ship was deemed too unsafe even for this. In 1937 she was towed to Sparrow Cove in the Falkland Islands, a remote and windswept beach, where she was left to deteriorate for 37 years. The ship’s fittings were removed by thieves, a huge crack appeared in her side and her only visitors for many years were penguins and picnickers.

After seeing a picture taken in 1845 of the SS Great Britain, Dr Ewan Corlett, a British Naval Architect, became fascinated with the ship and wrote a letter to the editor of The Times newspaper in 1967. He argued that the SS Great Britain was as important as the famous tea clipper ship, the Cutty Sark, and hoped to persuade readers that the ship should be recovered and preserved before she was lost forever.

The letter received support from the Falkland Islands Company, the National Maritime Museum and many other people. In 1969, Jack Hayward, an English philanthropist, gave £150,000 to fund the ship’s rescue and to bring her back to Bristol.

On 7 April 1970, a team of expert divers managed to re-float the SS Great Britain, after spending days plugging holes in the ship’s hull and pumping out water. It took two more weeks, working in terrible weather conditions, for the salvage team to secure the ship on to a huge floating pontoon (raft). Finally, on 24 April, the ship began her 8,000 mile and 87 day journey back to Bristol across the Atlantic Ocean.

Examine this photograph of the SS Great Britain scuttled in Sparrow Cove, the Falkland Islands 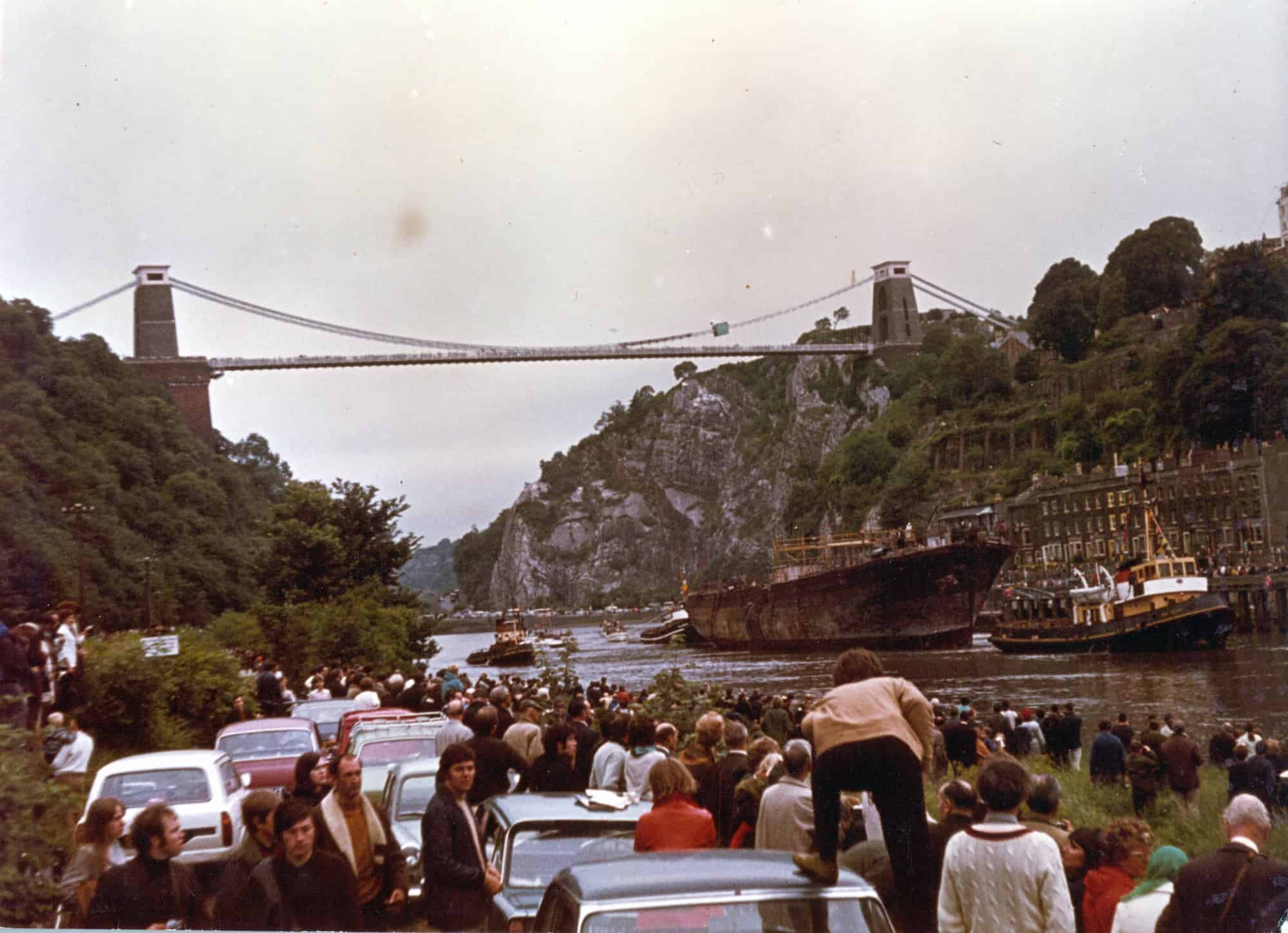