With voyages to Australia on the SS Great Britain lasting on average 60 days and with up to 700 passengers on board, complaints like those listed in the poem were common.

The bread given to passengers was not just a problem on John Henry Chatterton’s voyage. Over ten years later passenger Francis Dell wrote in his diary that “we can’t at all stomach the biscuits. Dreadful hard takes half an hour to eat one”. During an earlier voyage in 1852, passenger Edward Towle complained in his diary that the cook had accidently made the tea with saltwater and that the drink had been promptly poured overboard!

The quality of the food and drink wasn’t the only issue that the passengers of the SS Great Britain complained about. The movement of the ship was another cause of complaints, with one passenger Job Welling in 1875 writing that “The old ship keeps up a fearful rolling from side to side, has scarcely been steady a minute since Thursday evening”. Other passengers grumbled about the ship being dirty, smelly and about water occasionally coming in through the portholes. During the journey to Australia, the ship passed through different climates and passengers often wrote about either being too hot or too cold depending on where they were on the voyage.

Unsurprisingly, boredom during the long voyages was often mentioned in diaries and letters. Annie Henning wrote in her diary that “People are bored now. The first couple of days there were dancing and music in every corner of the ship. Now it only happens occasionally”. Perhaps this boredom played a part in the fact that arguments were common and sometimes fights would break out amongst passengers. It was not uncommon for the captain to stop the passengers’ daily alcohol allowance to calm situations and prevent further fighting. But this of course led to more complaints – a vicious circle!

Poetry on the SS Great Britain

Writing poetry appears to have been a popular way for passengers to entertain themselves on board Poems were frequently performed as part of plays and concerts on board the ship and passengers often read poems they had written. In 1862, Mr Dearlove wrote in his diary that fellow passenger William Jones joined him in his cabin after tea and read his poem all about the SS Great Britain and the voyage they were on.

Poems also feature in many of the newspapers that passengers wrote as they were traveling on the SS Great Britain. Many of these poems appear to have been written by the passengers themselves, though often anonymously, and cover a wide range of topics. Some are about life on the ship or the ship herself. Poetry was even used for advertising purposes – one passenger wrote a poem describing his missing hat and offering a reward for it’s safe return!

“I’ve lost my cap, not worth a rap,
And scarcely ought to mind it.”

There was a range of different types of poems produced, some were long, almost like stories, whilst others were only a few lines in length. The Albatross newspaper, produced during a voyage in 1862, featured an acrostic poem using the first letters of each word in the newspapers title. The Great Britain Times, written during the voyage to Australia in 1865, featured a “Poet’s Corner” each week with many of its poems about missing home, the journey, or love.

“For ever, oh! For ever,
Thy lovely face I see”

Not all the poems in the newspapers were new compositions – some were copied from pre-existing poems. An extract from a poem all about searching for gold was included in the on-board newspaper Great Britain Gazette published in 1861.

“Gold, gold, glittering gold;
It captivates both young and old”

Why not download and print the poem then add your own illustrations? What would a “Goat of the Sea” look like?

Search the grumbles on Global Stories and use one/some of them to create your own version of the “Goat of the Sea” poem.

Learn more about John Henry Chatterton and his journey on the SS Great Britain.

Try a ship’s biscuit for yourself by following this simple recipe.

Read this extract of a poem about finding gold in Australia. It was published in the SS Great Britain Gazette a newspaper published on about the ship in 1861.

Watch poet Saili Katebe perform his poem “After ‘70” all about the SS Great Britain. The poem written as part of the Afrika Eye Festival 2019. You can download the poem here.

What’s For Dinner?
Use the bill of fare from a Victorian voyage on the SS Great Britain to plan a meal (download and print) 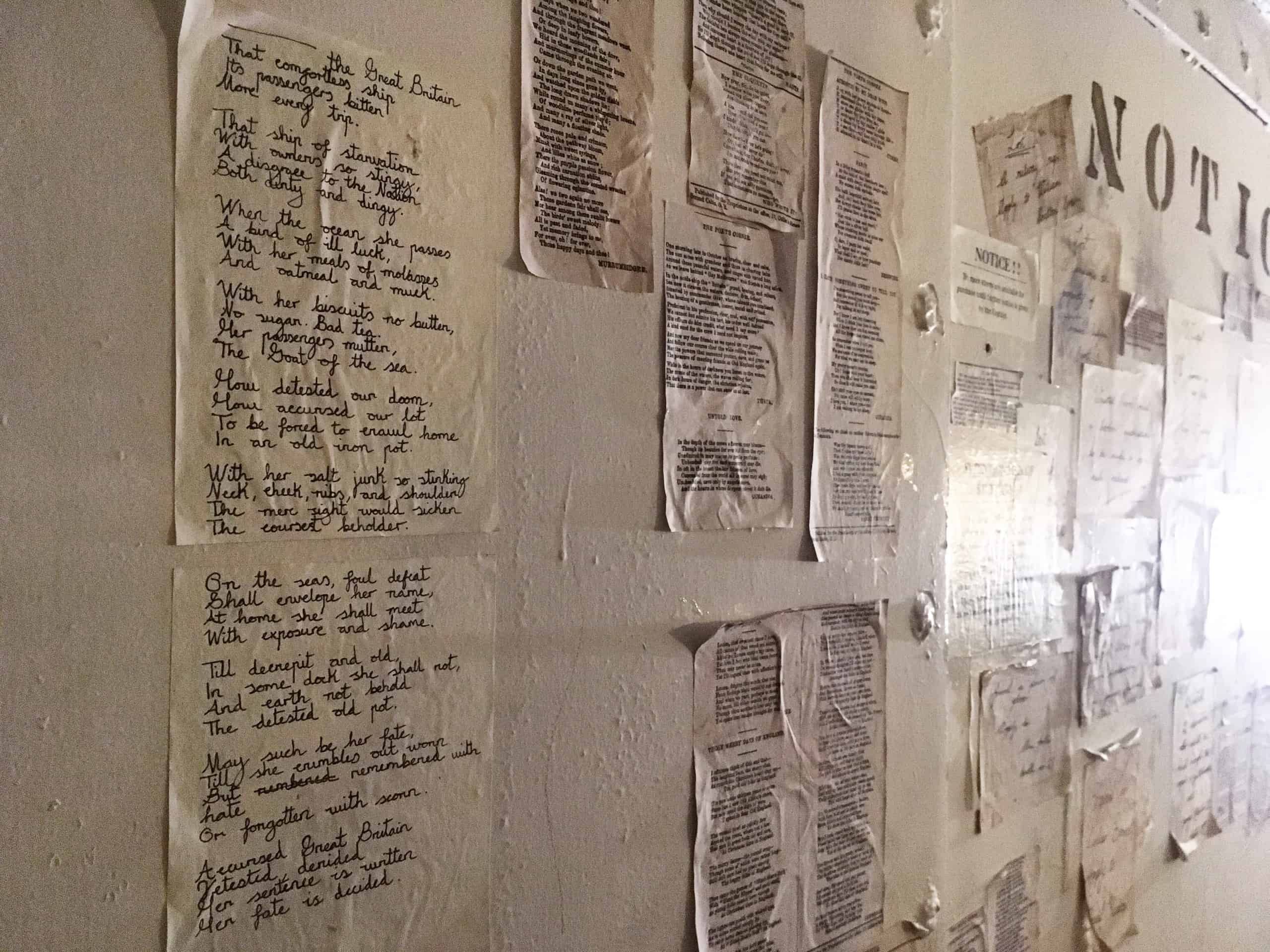 A recreation of the poem stuck up on the wall in steerage onboard the SS Great Britain.