How do you picture Brunel?

Personal belongings, such as Brunel’s cigar case and his last cigar, can tell us a story about the people they belonged to and what life was like a long time ago.

The cigar case stamped with Brunel’s initials and ‘Athenaeum Club Pall Mall’ tell us that Brunel smoked cigars, and that he was a member of a Gentleman’s Club.

Gentleman’s clubs became popular in the Victorian times for people in professions such as Engineering, Science, and Politics to come together to socialise with people of similar intellect, discuss common interests and make business contacts.

Cigar smoking was a popular pastime amongst the upper classes and cigars were considered to be a luxury. Brunel was described by George T Clark (Brunel’s Assistant in 1839) as indulging in cigars ‘to excess’ and he remembered him as always having a cigar in his mouth, even in bed! Brunel’s large leather cigar case was always close to hand, and likely contained just one day’s supply of cigars.

This object shows us that Brunel had a passion for fine things and that he moved in well-connected social circles. Through objects like the cigar case, Brunel’s sketchbooks, diaries and other personal belongings, we can build up a picture about who Brunel was and what his life was like.

Conservation
Museums look after objects, so they can continue to be enjoyed by people for many years to come and help us to piece together stories about the lives of people that owned them.
Over time objects such as the cigar case can become extremely fragile. It is important that they are carefully looked after or ‘conserved’ as they can never be replaced. When the cigar case came to the Brunel Institute it had to be treated and cleaned with special chemicals and, in places, repaired, to make sure it remains stable and safe when on public display in the museum.
Changes in temperature can cause material, such as leather, to crack or become mouldy, and light can cause the colour to fade. To help stop this happening museum objects are often kept in a display case with low level lighting and they are kept at a temperature of between 16-22oC.
When not on public display, museum objects, are kept in special ‘archival’ boxes and padded with acid free tissue to prevent them from being damaged.  When handling these objects curators (people that look after objects in the museum) wear gloves to stop sweat and oils from their skin, which can damage the object, being transferred to it.

Compare the photographs of Brunel taken by Robert Howlett in 1857 on the Great Eastern here and his final photograph standing by the funnel in 1859 here. What do these images tell us about Brunel?

Find out A ‘bit about Brunel’ with this factsheet. 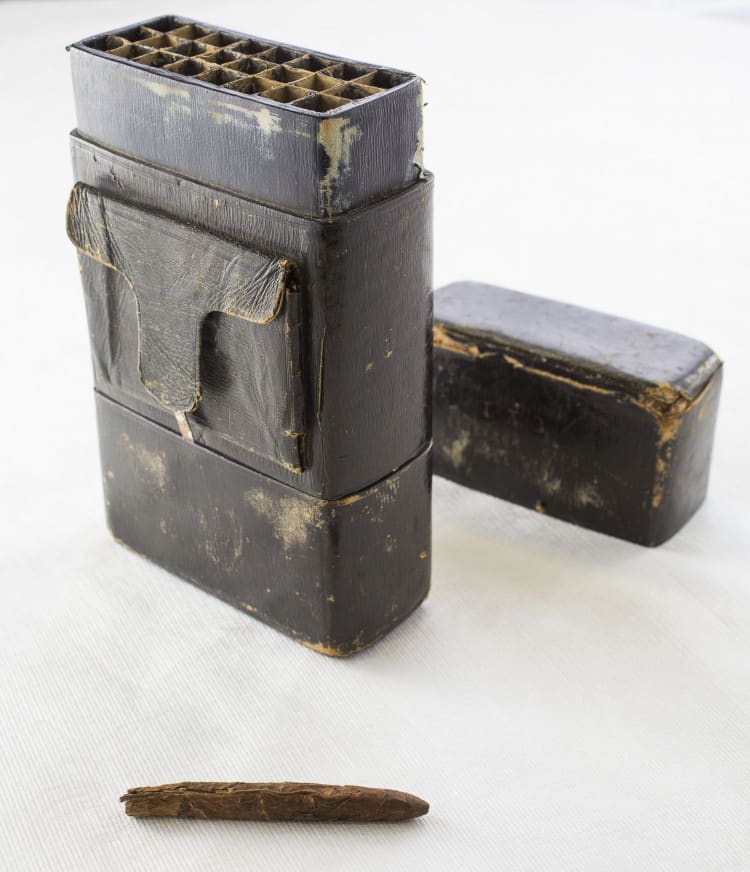 Brunel’s Cigar case and his last cigar: Accepted under the Cultural Gifts Scheme by HM Government from Clive Richards OBE DL and allocated to the SS Great Britain Trust, 2017