In the 1830s, Brunel’s nickname was “the Little Giant” because he was a “restless, highly mobile bundle of energy” and was able to manage several projects at the same time. By 1857, Isambard Kingdom Brunel was well known as a great engineer.

Brunel had worked on many big engineering projects since beginning his career, when he helped his father, Marc Brunel, start construction on the Thames Tunnel in London. Some projects, such as the Clifton Suspension Bridge, the Floating Harbour of Bristol Docks and the Great Western Railway, have had a huge impact on Bristol and the local area.

Brunel had also designed two successful steam ships, the ps Great Western and the ss Great Britain, both built in Bristol. When this photograph was taken in 1857, his third ship, the pss Great Eastern was about to be launched.

Over the 19th Century, engineering projects like Brunel’s changed the lives of British people and how they were able to travel across Britain and the world.

Brunel was aware of his reputation and carefully planned how he was presented in photographs that might be seen by the public.

This image of Brunel with his stovepipe hat, cigar and muddy trousers presents him as a confident, hard-working engineer. This is often how he is now remembered. However, Brunel was really dealing with huge technical and financial worries when this photograph was taken, due to problems with the pss Great Eastern.

By 1857, photography was becoming popular. It was now more common for people to have photographs of themselves taken and for the public to buy photographs of famous people, places and landmarks.

This photograph was part of a series, that photographer Robert Howlett took of the pss Great Eastern, between November and December of 1857. This photographic series was widely reproduced due to the Victorian public’s interest in the great engineering projects of the age. Engravings were also made and printed in newspapers, allowing these images to be more widely seen. The photographs were also sold as stereoscopic cards that could be viewed through a stereoscopic viewer and transformed into three-dimensional (3D) images. 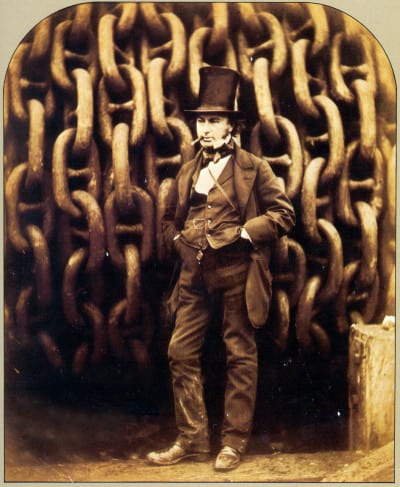 Copy of photograph held at the SS Great Britain Trust.