Take a trip to a Victorian Christmas

Take an unforgettable trip to Brunel’s SS Great Britain this December. For three weekends, the award-winning attraction will be transformed into a historical winter setting, taking visitors into the heart of a Victorian Christmas.

Though it’s been years since Bristol saw a white Christmas, Brunel’s SS Great Britain is promising falling snow whatever the weather.

Stroll across the snowy dockyard, and explore the ship brought to life with seasonal sights, sounds and smells. We are also welcoming Old Father Christmas on board, who will be festively adorned in his traditional green robes!

If this isn’t enough to make you feel like you have stumbled onto the set of A Christmas Carol, you will also get to meet a cast of 19th century characters! Interact with members of The Ragged Victorians living history group, Mr Brunel and, of course, Old Father Christmas, who will be bringing an 1800s Christmas to life.

Brunel’s historic ship was launched in 1843, the same year A Christmas Carol was published, and so festivities on board would have looked much like the sights described in Dickens’ classic novel.

On a Dickensian-like journey, you will discover incredible stories of the past, a multisensory experience in the present, and lifelong memories for the future. 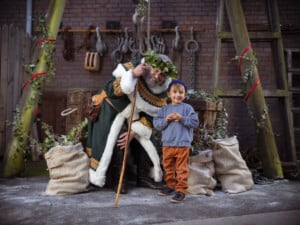 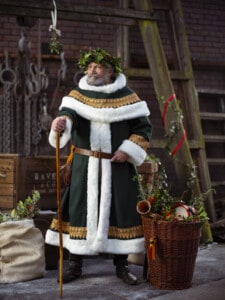 The SS Great Britain is offering a unique experience to travel back in time and encounter a Victorian Father Christmas.

Father Christmas’ origins in England date back to ancient pre-Christian festive folklore, where an unnamed pagan figure, robed in a green hooded cloak and wearing a wreath of holly, would come to lift people’s spirits during the bleakest time of year.

Though he gained some years and his robes gained some fur, the Victorian Father Christmas is closely aligned with his origins. He was a merry old man who was the life and soul of the festive parties, bringing joy and laughter to everyone he meets.

This year, Old Father Christmas is back and ready to board the SS Great Britain. He will be on deck to entertain visitors with tales of Christmas past… 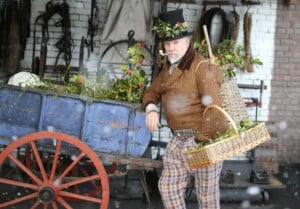 The Victorians established the heart and soul of Christmas, as a celebration of unity, family, and tradition.

Dickens’ A Christmas Carol brought focus to community during the festive period, he described the holidays as:

“A good time: a kind, forgiving, charitable, pleasant time: the only time I know of in the long calendar of the year, when men and women seem by one consent to open their shut-up hearts freely, and to think of other people below them as if they really were fellow-passengers to the grave, and not another race of creatures bound on other journeys.”

The SS Great Britain brought together people from all levels of society to live among one another other for months at a time. During her voyages passengers from all over would celebrate Christmas together at sea.

Step inside a Victorian Christmas scene 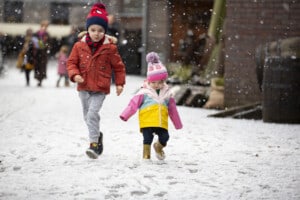 During our Christmas weekends, the dockyard will be transformed into a snowy picturesque setting.

If this isn’t enough to make you feel like you have stumbled onto the set of A Christmas Carol, you will also get to meet a cast of 19th century characters.

Alongside the familiar faces of Mr Brunel (who will have a bit of Christmas makeover) and the other costumed characters, there will also be members of the Ragged Victorians living history group.

– Brunel’s SS Great Britain is the top-rated visitor attraction in Bristol and top 10 museum in the UK (TripAdvisor 2021). The museum was awarded ‘Europe’s most welcoming museum’ in the European Museum of the Year Awards (2019).

– The SS Great Britain now rests in the very dock where Brunel built her – the Great Western Dockyard in Bristol’s Floating Harbour.

– Known as ‘the world’s first great ocean liner’, the ship sailed around the world 32 times, travelling more than 1,000,000 miles at sea.

– Voted the second Greatest Briton of all time, (after Winston Churchill), Isambard Kingdom Brunel was one of the 19th century engineering heroes.

– At the SS Great Britain’s launch in 1843 she was by far the largest ship in the world; and the first ever to combine a metal hull and screw propulsion.