Every year the Festival of Archaeology encourages people to look at their local areas and uncover the stories of communities who had lived there before.

Even with the Festival having ended, we continue to explore the past here in the Great Western Dockyard and are looking at our archaeological collections in the Brunel Institute. When the Brunel Institute was built there was an exciting excavation right under our feet where the visitor entrance and David Macgregor Library now stand. In the last few weeks, Zoe Newth, a placement student studying MA Heritage Management at Bath Spa University, has been preparing these finds and the excavation documents for cataloguing into the Institute’s database.

The Great Western Dockyard has always been an important part of Bristol’s shipbuilding industry; the archaeological collection was created when Wessex Archaeology surveyed and excavated the land where the Brunel Institute was built in 2008. After the dig, the materials found were donated to the SS Great Britain Trust.

The dockyard was created by the Great Western Steamship Company (GWSSC) to build the SS Great Britain. After the ship was launched in 1843 the dockyard was used to build two further ships and refit Brunel’s other ship the PS Great Western. Importantly, the Dockyard also included the world’s first integrated Steamship Engine Factory. Its original purpose was to build the SS Great Britain’s engines, but was also the base for heavy engineering work in the dockyard, explaining why so much industrial waste was found during the excavation. As a result, the archaeological collection contains lots of metal residue and slag; these materials are to be expected from working dockyards or industrial sites where blacksmithing, foundry casting and machining took place. Stone and mortar flooring found during the excavation is evidence of the building’s foundations.

The archaeological collection also includes clay pipes and many pottery fragments. These highlight other stages in the site’s complex working life. After the steamship company went into liquidation in 1850, the dockyard continued to operate but the Engine Works building was sublet and became a tannery for over 30 years before being used by the Great Western Railway as a dockside warehouse, granary and tobacco store, which may explain the vast amounts of pottery fragments found in the excavation.

The old Engine Works was badly damaged following bombing in 1941, but after the return of the SS Great Britain to Bristol in 1970, parts of the site were used as a workshop and storage area until the Brunel Institute was built, incorporating fragments of the walls of the original Engine Works which can still be seen in the shop and internal spaces of the Institute itself.

A few finds from the excavation remain a mystery though. These include coconut shells, oyster shells, and animal bone. There can be guesses on why these items are here – perhaps they are the result of cargo being transported through the harbour, but no definite answer has been found yet. 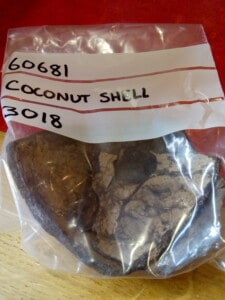 It has been incredibly interesting visualising how the dockyard used to be and viewing photographs from the excavation itself, so next time you are looking around our gift shop, try to imagine what it used to look like!