Getting the SS Great Britain back to Bristol was a difficult task. Her hull was badly rusted and cracked in one place. A pontoon (floating platform) was used to bring her across the Atlantic Ocean from the Falkland Island. However, for the final part of the journey into Bristol Harbour she had to travel without it, due to the narrow River Avon and harbour entrance.

The ship arrived at Avonmouth near Bristol in June 1970 and was placed into a dry dock. There a crack in the hull was sealed up using quick drying concrete and then the ship was ready to travel up the river back into Bristol harbour.

On the 5 July 1970, the SS Great Britain began her journey up the River Avon, with the help of three tugboats. One at the front pulling the ship along, another at the back to help slow her down, and the third on hand to help if needed. As these boats towed the ship up the river, crowds of people lined the banks. Dave Sidwell, who was working on one of the tugs on the day, recalled what it was like “We could see people all lining up on the bridge, and on the Portway and on the tow path and they were shouting and cheering and there were more and more people and we suddenly realised this was something special.”

The SS Great Britain was towed under the Clifton Suspension Bridge, this was an iconic moment as it was the only time she ever sailed under the completed bridge. When the ship left in 1845, the bridge designed by Isambard Kingdom Brunel, was unfinished.

The ship safely negotiated the Cumberland Basin and entered the harbour. However, the water in the harbour was not deep enough on that day to return her to the Great Western Dry Dock. As a result, the SS Great Britain was moored up by the Y Shed to wait for a higher tide.

To get the SS Great Britain back into the Great Western Dockyard, a very high spring tide was needed. This was to make sure that there would be enough water in the dock to safely float the ship in. The evening high tide on the 19 July 1970 was perfect for the Great Britain to make her last ever voyage. It was only a short one, across Bristol Harbour from the Y Shed to the dock where she had been built.

A few people with tickets were allowed on board for the journey. One of those on board was the Duke of Edinburgh, Queen Elizabeth II’s husband, who had a tour of the ship as she was being moved. On the exact day 127 years earlier, Queen Victoria’s husband Prince Albert had attended the ship’s launch.

It was a tight squeeze getting the ship back into the dock, but she was eventually brought in and carefully lined up so that once the water was removed the ship would sit in the dock. The passengers disembarked and the dock gate was floated back into place. Then as the tide went out the water was slowly drained from the dock and the SS Great Britain came to rest safely back home.

To travel on the SS Great Britain passengers needed a ticket. Imagine you could travel on the ship, fill in a boarding card, where would you go and why?

Discover more about the SS Great Britain’s return to Bristol.

Find out about the launch of the SS Great Britain. 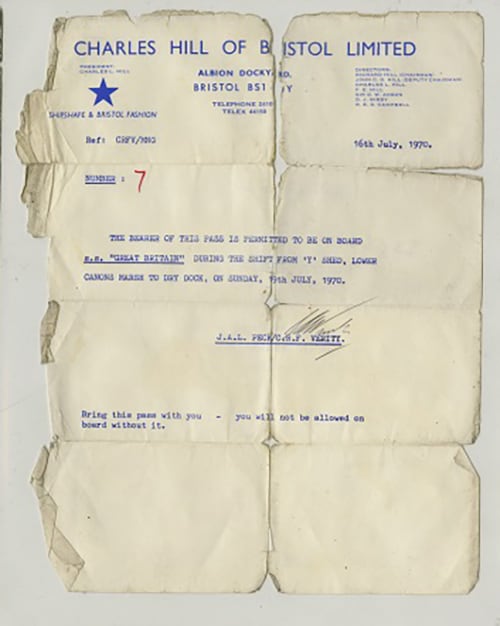