Art in the Shakespeare Room

The dining room in Isambard and Mary Brunel’s London home was known as the Shakespeare Room. This was because on the walls hung nine different paintings showing scenes from William Shakespeare plays. They included scenes from Midsummer Night’s Dream, As You like It and Macbeth. Another Shakespeare inspired painting hung in their drawing room.

Brunel was a fan of Shakespeare’s plays and commissioned some of the best British artists at the time, including Edwin Landseer, to celebrate the playwright. His chosen artists joined him for dinner on 18 December 1847 to discuss the project. The artists could choose the subject for their painting as long as it showed a scene from a popular Shakespeare play. The group met again in January 1848 where they discussed their ideas for their paintings. At a third meeting Brunel looked over rough sketches to make sure that all the pictures worked well together and would suit his dining room. The paintings were completed over the next few years with the last, showing a character from The Winter’s Tale, finished in 1856.

You can see a print of the original Landseer painting in a recreation of the Shakespeare Room at Brunel’s SS Great Britain.

The play a Midsummer Night’s Dream is a comedy written by Elizabethan playwright William Shakespeare around 1595-1596. Set in a magical forest outside of Athens, there are several plot strands that weave together in the play. There is a group of four young people, two men and two women, who’ve run away into the forest; a group of amateur actors rehearsing a play; and the Fairy King and Queen who have fallen out with each other. Flicking between all three groups is the mischievous fairy Puck, who causes mayhem. He makes the two young men both fall in the love with the same woman, to the horror of the other woman. He also bewitches one of the actors, Bottom, turning him into an ass and then makes the Fairy Queen Titania fall in love with Bottom. It is this scene which is shown in the print.

At the end of the night Puck, under instruction from Oberon, the Fairy King, removes the all the enchantments. The play ends with the amateur actors performing the play they had been rehearsing at a triple wedding.

Producing prints of original works of art is a common way for artists to make more money from a painting. The prints can be mass produced and sold cheaply, allowing a wider audience to enjoy the work.

The print of “Midsummer Night’s Dream” has been copied from the original painting using the mezzotint form of printing. The picture is created on a metal plate using thousands of tiny dots; the depth of the holes helps to create the different shades in the image. Ink is then applied, and the ink stained metal plate is pressed on to paper, the process is repeated to create the final image.

Learn more about Brunel’s Shakespeare Room with these two Collection Stories: “Jacques and the Stag” and Brunel’s Dessert Stand.

The “Midsummer Night’s Dream” mezzotint print was created using engraved metal plate and ink. Why not become an artist and create your own print? You could try potato printing with a carved potato and paint.

Discover the arts and find out about creative people like Brunel, Shakespeare and Landseer with this Brunel-themed Arts Award Discover logbook

Take a closer look at the sketch Brunel drew as he worked out how the Shakespeare pictures would fit in to his dining room. Image courtesy of the Brunel Institute – a collaboration of the SS Great Britain Trust and the University of Bristol.

Watch a storyteller retell the story of a Midsummer Night’s Dream, courtesy of Shakespeare Week 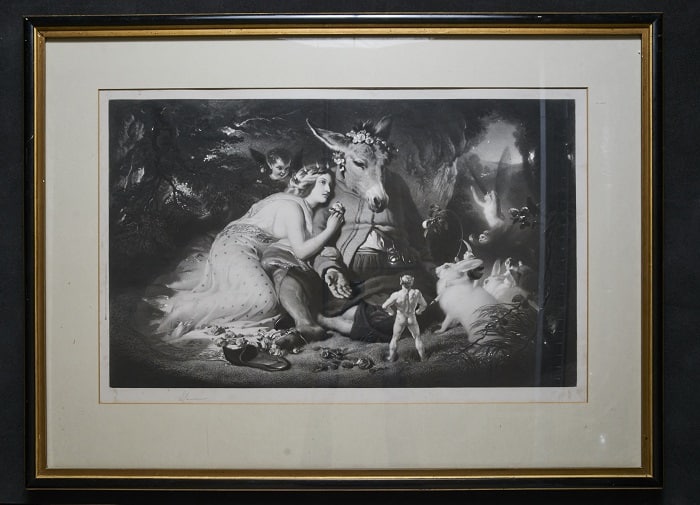