Born in June 1842, Henry Marc Brunel was the second child of Isambard Kingdom Brunel and Mary Horsley. Like his father and grandfather, Sir Marc Brunel, Henry became an engineer. Isambard was keen for his son to follow in his footsteps and encouraged him in his profession.

Henry spent several years as an apprentice for a few different engineers, including Sir John Hawkshaw, who was one of two engineers to finish building the Clifton Suspension Bridge in Isambard Kingdom Brunel’s memory. Like his father, Henry worked on a range of different types of projects, including tunnels, bridges and railways. In 1866 he was involved in a plan to build a tunnel under the English Channel to link England and France. Henry learnt about geology so that he could help with the initial stages of the project, but it was abandoned before any part of the tunnel was dug.

Henry Brunel also designed a ship, the SS Chauncy Maples which, like the SS Great Britain, was a steamship with a screw propeller. She is still afloat today though her steam engine was replaced with a diesel engine in 1967.

Later in life, Henry worked alongside his older brother, Isambard Junior, to write books about their father and help to protect Isambard Kingdom Brunel’s legacy.

Not lost at sea

Now imagine you’re on the SS Great Britain in the 1850’s sailing to Australia, how can you work out where you are? GPS won’t be invented for another hundred and twenty years! The crew on the SS Great Britain had to rely on a range of different instruments and maths to help them. In the middle of the ocean, with no obvious landmarks, crew used compasses, sextants and the sun to help them plot their position on maps and keep the ship sailing in the right direction. A sextant, similar in design to a quintant, was used to measure the angle of the sun above the horizon. This angle and the exact time the measurement was taken was used to calculate the ship’s latitude and longitude,
which could then be used to pinpoint the ship’s exact location on a map.

At night, without the sun, navigation became harder; however, the sextant could still be used, with the crew relying on the North Star and moon for their calculations rather than the sun.

Sextants are an incredibly reliable piece of equipment because they do not need electricity or satellites to work. Some modern ships still carry one in case their more modern methods of navigation fail.

Find out about creative people like Henry and Isambard Kingdom Brunel, with this Brunel-themed Arts Award Discover logbook

Learn more about the challenges faced by Isambard Kingdom Brunel when designing the Great Western Railway by taking a close look at his Drawing Set and Dessert Stand. 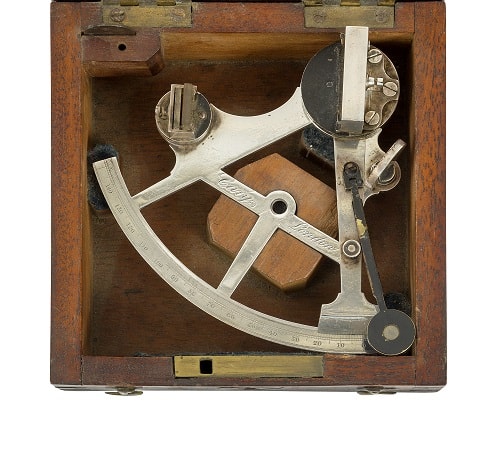