A Ship’s Biscuit Belonging To Mr Rowland; A Passenger On The SS Great Britain, 1874

Ship’s biscuits are simple, twice-baked biscuits made from flour, salt and water. They have been eaten for centuries during sea travel because they last for a very long time; making them an ideal food for long voyages. The journey between Liverpool and Melbourne, Australia – on the SS Great Britain – lasted about 60 days. Ship’s biscuits were an important part of Third Class and Steerage passengers’ diet and were also eaten by the ship’s crew.

The biscuits would need to be softened before eating. Francis Dell noted in his diary that they would be soaked in liquid such as tea or coffee for at least 15 minutes. It was also important to tap biscuits on a hard surface or your elbow before eating to dislodge tiny insects called biscuit beetles or weevils.

This ship’s biscuit was kept by Mr Rowland, a passenger who travelled on the ss Great Britain from Melbourne to Liverpool in 1874. He saved this biscuit for many years after his journey, possibly as a souvenir of the experience. In 1972, his daughter, Georgina Rowland gave the ss Great Britain Trust his biscuit. You can see it today on display in the Dockyard Museum at Brunel’s SS Great Britain.

Food on board – First Class

Food was clearly very important to passengers travelling on the SS Great Britain. It is mentioned frequently in passengers’ diaries. Food was prepared in the ship’s Galley (kitchen). Live animals such as sheep, pigs and chickens were kept on board to provide fresh meat and one cow would be taken on each voyage to provide fresh milk for First Class passengers only.

Mary Crompton’s diary tells us that First Class passengers enjoyed meals four times a day at 9am, 12pm, 4pm and 7.30pm. Breakfasts were described by Annie Henning, a passenger who travelled in 1853, as “wonderful in the way of meat.” Her menu choices included hot beef steak, bacon, cold ham, tongue, mutton chops, herrings, eggs, tea, coffee and toast. Dinner was a grand affair with soup followed by a choice of 22 main courses, five vegetable dishes, nine pastries and six desserts on the menu, all served in the luxurious First Class Dining Saloon.

Food on board – Steerage Class

Passengers travelling in Steerage Class took it in turns to eat in small groups on tables next to their accommodation.  A ‘mess leader’ would collect food and water rations from the Pantry and take them to their group at meal times. Their menu was also much less varied. Breakfast consisted of ship’s biscuits and sometimes porridge. Main meals were often salt-preserved meat or fish, potatoes and a boiled pudding made of flour, known as ‘duff’. One passenger complained that the meat was extremely salty and tough to eat. Each week, Steerage passengers were given a small piece of cheese and sometimes even jam – a great luxury. Allan Gilmour, a Steerage passenger, described an occasion when Steerage passengers helped the sailors to catch a porpoise and were allowed a share of its fresh meat. 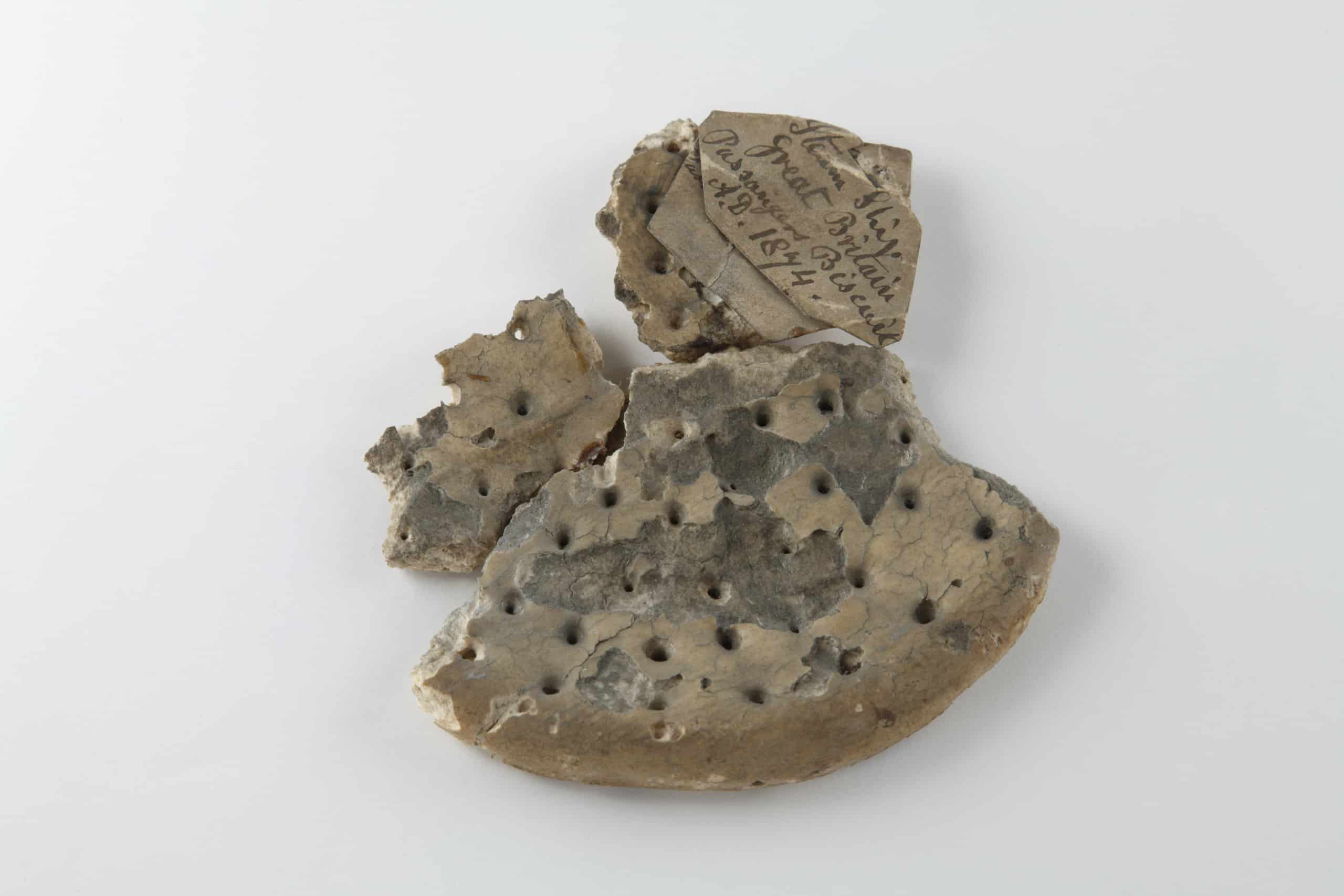