Passenger Mathias Jakobsen Photographed Before Leaving His Home In Denmark, 1870

Mathias Jacobsen travelled on the SS Great Britain as part of a longer journey to New Zealand. He hoped to be reunited with his brother Rasmus whom he had not seen for 8 years. Rasmus was working as a gold prospector (someone who searches for gold) in New Zealand.

Mathias travelled from Denmark to Liverpool, England with two friends. On boarding the SS Great Britain, they become separated; his friends were travelling in the second class cabins, whilst Mathias’ ticket was for Steerage. He writes that his first evening on the ship “wasn’t all bad” however, as three Englishmen shared their bacon, cheese and bread with him.

The ship departed for Australia on 6 October 1870. Mathias describes the first week as lively, with people laughing, playing cards, and entertaining each other with comedy and music. Later in the journey the atmosphere became quieter as boredom set in, and Mathias wrote often about missing his family and home back in Denmark. 59 days later, the SS Great Britain arrived in Melbourne on 4 December 1870. Mathias then boarded another ship and travelled to New Zealand.

Mathias arrived in Rosstown, New Zealand in early 1871. He was reunited with his brother and worked as a prospector for four years. Life was hard and his search for gold was not as successful as he had hoped. In 1875 Mathias returned home, travelling first to Melbourne, where he boarded the London-bound SS Somersetshire in August, before travelling onwards to Denmark. In 1891 he finally achieved his dream of buying a farm where he lived with his wife and seven children and became a member of the parish council.

For many passengers on the SS Great Britain, their journey was the start of an exciting new life. Passengers travelled for lots of different reasons; while some people never returned to Britain, others came back and even repeated their journey several times.

The discovery of gold near Melbourne in the early 1850s created a ‘gold rush’, and ships such as the SS Great Britain carried thousands of people to Australia. Many passengers hoped for wealth and a better life. Travelling onwards to New Zealand became more attractive in the 1860s when gold was also discovered in the west of the country.

Sources like this give us a picture of what each voyage was like and what passengers did on board, including details about food, entertainment, fighting, rats, births and deaths. From passengers’ diaries, we know that the experiences of those who could afford more expensive first class tickets were very different to passengers who had bought the cheapest tickets and travelled in steerage class.

Today, you can see some of these diaries at Brunel’s SS Great Britain, on display in the Dockyard Museum or looked after at the Brunel Institute. 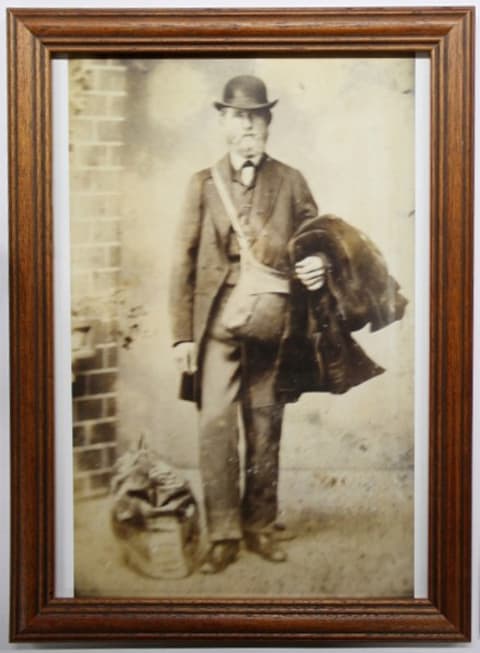 This photograph is a reproduction held at the ss Great Britain Trust. Mathias Jakobsen's family kindly allowed the Trust to make a copy of the original photograph, still looked after today by the family.