The Clifton Suspension Bridge Under Construction, 1863/1864

The Bridge’s construction began on 21 June 1831 but work was delayed due to a lack of money. In October 1831, rioting in Bristol caused investors to lose confidence in the project which led to work on the Bridge stopping for four years.

Brunel was very attached to this project and, in 1835, construction recommenced. Brunel wrote in his diary “Clifton Bridge – my first child, my darling, is actually going on – recommenced week last Monday – glorious!”

Compromises had to be made whilst building the bridge due to practical concerns and again, a lack of money. All work on the Bridge was abandoned in 1853 and did not begin again until 1861; two years after Brunel’s death. The new engineers, Hawkshaw and Barlow, changed parts of Brunel’s design, including omitting Brunel’s Ancient Egyptian style sphinxes, originally designed to sit on the top of the Bridge’s towers.

The Clifton Suspension Bridge was finally completed on 8 December 1864. There was a great opening ceremony, involving a procession and speeches by various important local people. Sadly, Brunel, who died in 1859, never saw the Bridge finished.

This photograph was taken before the Bridge was finished. For many years, there were only two towers standing on either side of the Avon Gorge, covered in wooden scaffolding. Between 1836 and 1853, people could pay to cross the Gorge in a basket hanging from a curved iron bar (visible in the image).

Once, a newly married couple crossed the Gorge in the basket as part of their wedding celebrations. Unfortunately, a rope that was part of the hanging basket mechanism snapped, leaving the couple dangling 76 metres above the River Avon for hours until they were rescued.

In 1831, Isambard Kingdom Brunel won a competition to design a new suspension bridge at Clifton, Bristol.

The committee judging the competition asked well known engineer Thomas Telford for his advice. Telford asserted the logic of the time that a suspension bridge could be no longer than 600 feet (about 182 metres), but Brunel’s winning design was actually 630 feet long (192 metres).

Huge chains run over the two large towers, are then anchored into solid rock on either side of the Bridge and the Bridge platform is suspended from them. The forces caused by the weight of the platform and traffic crossing the Bridge are transferred to the towers and to the rock through the chains. These chains are made of wrought iron, a material which is very strong, cheap and quick to make. 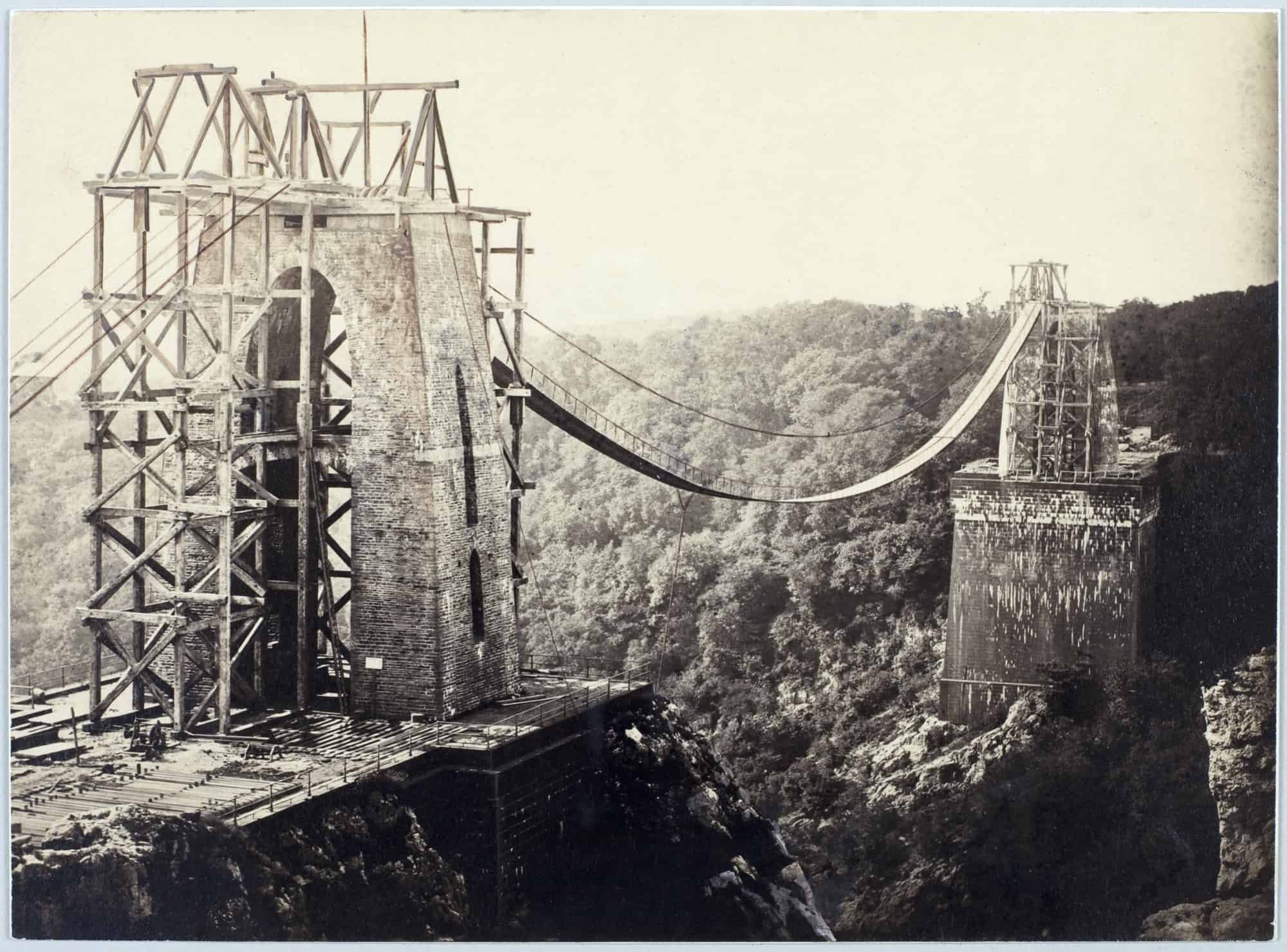 By Courtesy of the Brunel Institute – a collaboration of the ss Great Britain Trust and the University of Bristol.